The fiction in the yellow tent
Friday 5 August 2005


Everyone in Gaborone has by now either seen or heard of the big yellow
tent at the Gaborone Secondary School sports grounds. Yes, the
Scientologists are here in Botswana.


You may also have read the various articles in the press regarding this
group. Some of the articles have been written by the Scientologists
themselves, others by outsiders (which have not been nearly so positive
about them!).


I was invited to debate the subject with the Scientologists themselves
recently on Gabz FM. I was there in my role as a sceptic who has no
personal complaint with them but who has heard a little about them
elsewhere. The experience was fascinating!


I was keen to learn what it is that the Church of Scientology actually
believes and teaches. At great length, these visitors from South Africa
explained some of the supposedly good works they undertake around the
world but were curiously evasive about their core beliefs. They were
keen to make claims about what they do, but very unwilling to explain
their creed.


So what exactly is it that Scientologists believe? Ask a Christian, a
Muslim, a Hindu or indeed followers of any normal religion what they
believe and they will tell you honestly and with pride. Ask a
Scientologist and they simply won't tell you. They make claims about
what they do, but not what they believe. Why are they so shy about
their beliefs? The answer is simple. What they believe is ridiculous.
The secret is that once Scientologists reach a level of study called
"Operating Thetan Level 3" they are finally told one of the core
discoveries of the founder of Scientology, L. Ron Hubbard. This is that
75 million years ago, Xemu, the head of the Galactic Federation,
decided to cure his over-population problems by murdering excess aliens
by bringing them to Earth and killing them with hydrogen bombs. The
souls of these people now haunt us all and cause us all our mental
health problems.


Now can you see why they are so reserved about their beliefs? Of
course, they refuse to give a Yes or No answer when you ask them about
this. Wouldn't you be embarrassed explaining this nonsense?


L. Ron Hubbard was, coincidentally, a science fiction writer before
starting his own religion as well as a convicted felon with a history
of substance abuse and who consistently lied about his academic record.


The Church seems occasionally to have a curious grasp on truth. For
instance, they repeatedly refer to a famous article in Time magazine in
1991. This was the first really influential expose about the Church and
some of their activities. Needless to say, the Scientologists were
appalled at their secrets being exposed and sued Time for libel and
claim that a retraction was published. This is widely repeated by the
Church to anyone who will listen. However, they seem to forget to tell
the complete story. When I contacted Time in New York to ask their
opinion of this suggestion I was told that, "TIME won the lawsuit
brought against it by the Church of Scientology. The court granted our
summary judgment motion, and the Second Circuit Court of Appeals
affirmed the decision. We did not retract the story or any part of the
story".


That's not quite what the Scientologists would lead us to believe is
it?


Curiously, the Scientologists neglect to refer to this loss. Just as
they suggest that the Cult Awareness Network (CAN) who campaigned
against the Scientologists were somehow discredited because they later
went bankrupt. If they are suggesting that we shouldn't trust a
bankrupt I think that they should also point out that the founder of
Scientology, L. Ron Hubbard was, according to his FBI record, also a
bankrupt.


To be fair to the Scientologists, they do undertake a lot of community
outreach work that attempts to address a number of key social issues
such as crime and drug abuse. However, these schemes (Criminon and
Narconon) have both been criticised as being no more than recruiting
mechanisms for the Church. Also, the Church makes some rather strange
claims about these schemes when the only evidence from external
researchers shows that these schemes simply don't work.


In 1989 Everett R. Rhoades, M.D., the US Assistant Surgeon General,
said of Narconon that it "cannot be considered medically sound". In
1991 the Board of Mental Health of the State of Oklahoma declared that
Narconon "is not medically safe".


Despite this, the Scientologists continue to suggest that their schemes
are incredibly successful.


The list of claims made by the Church doesn't end there. Hubbard
himself stated that their techniques can cure leukaemia, arthritis and
radiation burns. In 1975, he said that "Scientology is used to
increase spiritual freedom, intelligence, ability and to produce
immortality".


They make various claims about their membership. The most recent claim
was that 8 million people worldwide are members of the Church. However
their definition of "member" includes anyone who has attended a
course, even if just once. The bad news is that if in the past you've
attended a Scientology course and even if you left halfway through
because you thought they were talking nonsense, well, sorry, but
you're a Scientologist. You're one of the 8 million!


Hubbard and his successors (he died in 1986) are notoriously sensitive
to criticism. They have resorted to a number of techniques to dispose
of and distract their opponents. Critics have been slandered and
libelled. In the early 1980s, Hubbard's wife and a number of top
Scientologists went to jail in the United States for burgling and
bugging over 100 private and governmental agencies and who dared to
oppose them.


Interestingly, the most common response from the Church when criticised
is to sue their critics not for libel but for breach of copyright. They
see their teachings as commercial secrets, which, in a sense, they are.
To get to high levels in the Church, you must undergo endless courses
which put you in touch with yourself (and the aliens no doubt). All of
this costs money and the amounts apparently increase astronomically the
further you go. At the big yellow tent in Gaborone you can buy an
initial booklet for P10. To get to the Tom Cruise stage (the
Scientologists love celebrity endorsements) some people suggest that
you need to spend sums approaching P4 million.


My final point is a personal one. Unlike the suggestion made to me on
the radio show that the critics of Scientology have some sort of vested
interest in opposing them, I have no such interest. I'm not selling
products in opposition to them. I'm not evangelising for an
alternative set of beliefs.


If you want to believe in Scientology, then good luck to you. But at
least be open with us about what your belief. Allow critics to
criticise. And don't think you can come to Botswana and solve all our
problems with a distinctly dubious set of beliefs and techniques.
We're not that naÃ¯ve.


One last quote from Hubbard. In an internal policy letter written on 18
October 1967 he instructed his followers to deal with opponents as
follows:


May be tricked, sued or lied to or destroyed."

"Armed with the effective solutions from The Scientology Handbook, Scientology Volunteer Ministers are helping their fellow man every day, all over the world."

"Mr. Mbambo helps these children with a workshop on study technology at the Scientology Volunteer Ministers Center in the village of Mochudi in south eastern Botswana."

From the article:Scientology Volunteer Ministers Provide Effective Solutions to the People of Botswana
The images are no longer working and from Mr Mbambo we have heard nothing since then although he was armed with "the effective solutions from the Scientology Handbook" 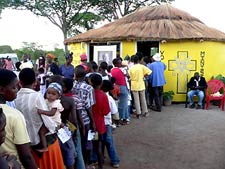 The expansion that really would make a difference seems to have ended, if it ever existed- Or was it just propaganda from a military organization that loves to label itself as a church in order to get more power and less tax on the battlefield to the battle-plan?