Nation of Islam Minister Louis Farrakhan said Sunday that he considers Libyan leader Moammar Gadhafi a friend and won't distance himself from him despite the deadly crackdown on protestors in the turbulent North Africa country.

Farrakhan didn't talk specifics about the uprisings in Libya as he spoke to thousands of followers during his Chicago-based organization's annual convention in the Chicago suburb of Rosemont.

"Name one ruler that has the 100 love of his people," Farrakhan said. "You can't find one."

Gadhafi is in the midst of a desperate and increasingly violent bid to retain power, and has used his military and foreign mercenaries to try to crush the revolt.

Farrakhan, 77, visited Gadhafi in the 1980s and has since considered him a friend. He said that if Gadhafi is persecuted for crimes against humanity, the same should apply to former President George W. Bush for the wars in Iraq and Afghanistan. He also said the U.S. shouldn't intervene in Libya with an armed response.

"I'm warning you this is a Libyan problem, let the Libyans solve their problem," he said.

Farrakhan also said he expects that uprisings happening in the Middle East will soon come to the U.S. He mentioned Tunisia, Egypt and other countries but didn't offer specifics on his stance on the unrest, except to say that leaders should not attack innocent protesters.

Farrakhan's speech Sunday capped off a weekend of events celebrating Saviours' Day, which celebrates the movement's founder. Muslims at the four-hour speech - women dressed in white skirt suits with matching hijabs and men in Nation of Islam uniforms - frequently cheered the minister.

The Nation of Islam has espoused black nationalism and self-reliance since it was founded in the 1930s, though in recent years has included other groups including Latinos and immigrants.

Farrakhan's speech touched on a wide range of historic topics through the lens of the Nation of Islam, including several severe weather incidents and a history of Shriners and freemasons. He also spoke at length about Scientology; Farrakhan has recently embraced some concepts of the religion.

Farrakhan also spoke of the Nation's belief in UFOs and the belief that sightings are on the rise.

The group has long believed in an unidentified flying object called "the wheel" or "The Mother Plane." A Saviours Day session on the topic Saturday attracted a standing-room-only crowd.

As a Scientologist, Minister Farrakhan apparently does not read the papers or look online. If he had, Farrakhan would have known that his good friend Colonel Muammar Gaddafi ordered his own people machine-gunned by military helicopters and bombed by military fighter jets.

Has The Church of Scientology driven Farrakhan mad?

By Richard Spencer in Tripoli

LIBYA'S major cities were in the hands of opposition forces last night as Colonel Muammar Gaddafi turned his air force on his people in a last-ditch bid to stay in power.

Jets bombed airfields and other military targets as he left the city, initially going to Sebha, the town where he grew up, to prevent the weapons falling into rebel hands.

Among the targets was said to be the fortified encampment in the capital Tripoli where he lived. Unconfirmed reports put the death toll in the fierce fighting in the capital at 160 yesterday.

Civilian areas were also said to have been hit. The regime had "declared war on its people", its own deputy ambassador to the United Nations, Ibrahim Omar al-Dabashi, said in disgust.

"What we are witnessing today is unimaginable," said one resident, named as Adel Mohammed Saleh. "Warplanes and helicopters are indiscriminately bombing one area after another. There are many, many dead. Our people are dying. It is the policy of scorched earth...."

So, Swift, do you see this as a case where Farrakhan has completely lost contact with reality, or...is he grabbing at his last great hope that the spew may be true?
The more who speak out, the more who get out.
Top

Benny's Friend wrote:So, Swift, do you see this as a case where Farrakhan has completely lost contact with reality, or...is he grabbing at his last great hope that the spew may be true?

This bizarre friendship between a Despot and a Minister reminds me of a similar event in 1978. Specifically, Melodyland Pastor Ralph Wilkerson befriended Ugandan Dictator Idi Amin and spoke highly of Amin to the press. Wilkerson's reputation went down the drain after that and he was implicated in a Ponzi scheme a few years later. Mr. Farrakhan's embrace of Gadhafi could possibly signal the end of Farrakhan's reputation -- not that his involvement with Scientology has helped it any.

*****
Given his friendship with Gadhafi, Farrakhan appears to be following David Miscavige's strategy. As One Of Those Who See said over at Marty's blog:

*****
1. In the 1970's -- to the 1990's, and perhaps even today, the Cult was certain that there was some vast conspiracy behind the opposition to Scientology. The short list included:

A. The Masons
B. The Vatican
C. The Rockefeller's
D. A Group of English Bankers
E. Psychiatry-cum-Nazis

Perhaps David Miscavige and Mr. Farrakhan compare notes on threats and who the enemy is? If so, I wonder if the two men also have the same friend in Libya?

Why does the press pay any attention to anything this nutjob says? They might as well go to a mental hospital and inteview the patients...they would probably make more sense.
"A man may build himself a throne of bayonets, but he cannot sit on it." -William Ralph Inge

I'mglib wrote:Why does the press pay any attention to anything this nutjob says? They might as well go to a mental hospital and inteview the patients...they would probably make more sense.

Glibby, the press pays a great deal of attention to Mr. Farrakhan. For example, the speech he gave today at the NOI Savior's Day event in Chicago was most edifying:


Farrakhan extolled the virtues of Scientology and its auditing process, which is considered spiritual counseling by its members.

“L. Ron Hubbard is so exceedingly valuable to every Caucasian person on this earth,” Farrakhan said.

“… L. Ron Hubbard himself was and is trying to civilize white people and make them better human beings and take away from them their reactive minds … Mr. Hubbard recognized that his people have to be civilized,” Farrakhan said to a cheering crowd.

This would presuppose that Mr. Farrakhan was EVER in touch with reality in the first place.

This would presuppose that Mr. Farrakhan was EVER in touch with reality in the first place.

True.
You couldn't write shit like this.
I mean, here we have lunatic bigot Farrakhan in bed with psychopath David Miscavige, franchising scientology, and then buttering up megalomanic "Colonel" Muammar Gaddafi (more than he already has done).
If Farrakhan was being truly analogous then he should be calling for an uprising by his own members upon himself and for scientologists upon David Miscavige.

“L. Ron Hubbard is so exceedingly valuable to every Caucasian person on this earth,” Farrakhan said.

“… L. Ron Hubbard himself was and is trying to civilize white people and make them better human beings and take away from them their reactive minds … Mr. Hubbard recognized that his people have to be civilized,” Farrakhan said to a cheering crowd.

Wow. The whole news article is a breathtaking slice of crazy, but this bit is fascinating. Is the implication here that Farrakhan sees Scientology as the tool that subjugates Caucasians to the NOI?

P.S. I'm having a good chuckle at learning this morning that I am Caucasian ergo uncivilized. How totally 1.1 of me.
The more who speak out, the more who get out.
Top

Benny's Friend wrote:Wow. The whole news article is a breathtaking slice of crazy, but this bit is fascinating. Is the implication here that Farrakhan sees Scientology as the tool that subjugates Caucasians to the NOI?

"A breathtaking slice of crazy," is a marvelous phrase that neatly sums up the entire Psychotic Extravaganza that is The Church of Scientology. As for the civilizing virtues inculcated in people by the Happy Fun Cult, one need only look at its products; and what could be more Culty than to be dehumanized into a product? Nevertheless, we must ask if people like Tommy Davis or any of the other "Caucasians" in the Sea Org "Exec Strata" are within even a billion miles of sanity: 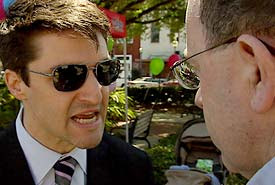 The answer of course is no. All persons in RTC and CST are insane and that is why they hold such great positions of power. Sane white people have no place in CoS or its law firms.

sekh
Posts: 821
Joined: Fri Jan 07, 2011 12:02 am
Location: Netherlands
[phpBB Debug] PHP Warning: in file [ROOT]/vendor/twig/twig/lib/Twig/Extension/Core.php on line 1266: count(): Parameter must be an array or an object that implements Countable

Am I reading this right? I'm only asking, I've never been in the Church of Scientology, so the potential of MU's is real.

What I read in that blog is Marty offering Farrakhan and his followers a way to learn REAL scientology without falling into the traps of the Deluded Dwarf. Marty the great humanitarian, warning the unwitting colored folks that little whitey is all about the money and the big houses. As if Farks didn't notice that by himself.... He's crazy, not stupid. He wants the big bucks and the big houses too.

Why on earth would anybody want to invite a crazy cleric with a following known for its violent tendencies and serious grudges against society, to learn how to manipulate and mind-control according to the teachings of Elron?

Call me a paranoid moonbat, but is this Marty's idea of getting rid of Davy M.? An army of Nation of Islam-brothers following Marty on their way to glory whilst trampling The Evil Midget in the race towards the motherplane?

And that Motherplane? Aint gonna come.

"If we extend unlimited tolerance even to those who are intolerant, then the tolerant will be destroyed, and tolerance with them."
Sir Karl Popper (1902 - 1994)
Top

I had to come back to this thread because I woke up thinking I'd merely imagined this pinnacle of barefaced nutjobbery.

Dear reader, if you too are still trying to come to terms with the BATSHIT INSANITY of it then I think we can easily explain it thus.....

....rounding off all arguments neatly with this picture of a fish on a bicycle....

Sponge, that is one of your best and they are all great. Your shoops will bring down the Cult -- and now possibly Gadhafi and NOI! You sir are a God among men. I say this due to your shoops and also the way in which you were able to make a large fish pose on a bike for days on end so that the sculpture could me done.