A place to post and debate the Church of Scientology.
Post Reply [phpBB Debug] PHP Warning: in file [ROOT]/vendor/twig/twig/lib/Twig/Extension/Core.php on line 1266: count(): Parameter must be an array or an object that implements Countable

14 posts [phpBB Debug] PHP Warning: in file [ROOT]/vendor/twig/twig/lib/Twig/Extension/Core.php on line 1266: count(): Parameter must be an array or an object that implements Countable
• Page 1 of 1


A letterhead so badly designed as to be truly enthralling. A visual feast.

It might be from a World War I poster of angel & soldier, photo-shopped. Clues are the helmet*, the old-fashioned style, and the angel** (VERY popular in World War I).

I can't find the original poster, but I see its flaws: The stupid sword would cut the soldier. A better medieval sword*** wouldn't. The boots are Wellingtons, which soldiers stopped wearing just before World War I, but which are too recent for medieval "knights." The clothing only covers the front. Flunk.

I kind of like the angel. She's sort of interesting.

The soldier/knight though. Ai yi yi. What is he supposed to be exactly? The boots and helmet don't make sense with the armor and sword.
"A man may build himself a throne of bayonets, but he cannot sit on it." -William Ralph Inge

The angel and soldier as depicted on that document were on the covers of, I believe, Scientology 8-08 and Scientology 8-8008. If I'm wrong about the titles I expect to be corrected. They were on covers of at least two book titles. That was in the late sixties and through the seventies if not longer.

From what I have been told, L. Ron Hubbard dictated very specifically what was to be on the covers of his books and he was very specific as to the details.

As I type this I am reminded of Hubbard's strict admonishment of not using verbal data and the statement, "If it isn't in writing it isn't true." What I'm relating here comes strictly through word of mouth with nothing written to back it up, so take that into account.

I was told that the angel represents the sea organization and the soldier represents the guardian's office.
“Think wrongly if you please, but in all cases think for yourself.”
Doris Lessing

That hippy-dippy angel was drawn in the late 1960's, but nothing else is in that style. The soldier has the same pose, WW1 helmet and Wellington boots in 8-8008 as the 1976 flyer. The difference is the armor that goes all the way around his butt and the sword has a practical hand-guard.

The soldier wearing wings conflates him with St. Michael who is supposed to protect the weak. It could also mean that the soldier died in battle, and will go to heaven with the pretty angel. I do not believe the winged-soldier was originally drawn in the 1960's; it must have been adapted from an old war poster or book. During the Vietnam war era nobody drew sentimentalized-winged-soldier art.

Hubbard must have approved this image (he likely saw WW1 posters as a child), but if the soldier represents the Guardian Office, then the soldier "went bad" along with the now-forbidden GO execs. In either version, I don't see the angel floating off the ground as "Sea Org" needing protection. Angels always take the poor brave guys to heaven. There has never been in art anywhere an angel that needed "protection." Needing protection was the job of damsels, who never have wings.

Someone was assigned to draw the 8-8008 book cover, saw an old poster and copied it, using "knowing how to know" that it was about Sea Org and GO. But, it wasn't. Ignorant fools, especially LRH.

Caroline has pointed out below that the winged soldier might be St. Michael, which has some parallel with the Guardian Office. Both simper and pretend innocence as they trample devils, or as Scientology calls them: "SP's."
Last edited by Don Carlo on Fri Jan 22, 2010 4:27 am, edited 2 times in total.
Top

That's the Guardian all right. In 1979, Scientology had me petitioning to Worldwide for the "privilege" of being in the SO. Kember was at that time defending herself in the Snow White criminal case.

Hubbard's magical constructs had long since exteriorized into "real life." His "Guardian Angel" was a real person, in charge of his Intel and black ops.


Jack Parsons to Aleister Crowley ca. January 1946 wrote:Although Ron has no formal training in Magick, he has an extraordinary amount of experience and understanding in the field. From some of his experiences I deduce he is in direct touch with some higher intelligence, possibly his Guardian Angel. He describes his Angel as a beautiful winged woman with red hair whom he calls the Empress, and who has guided him through his life and saved him many times . . . Recently, he says, because of some danger, she has called the Archangel Michael to guard us . . .

The winged male with sword and helmet is undoubtedly the Archangel Michael.


Wikipedia wrote:Michael (Hebrew: מִיכָאֵל‎, Micha'el or Mîkhā'ēl; Greek: Μιχαήλ, Mikhaḗl; Latin: Michael or Míchaël; Arabic: ميخائيل‎, Mikhaḗl) is an archangel in Hebrew, Christian and Islamic tradition. He is viewed as the field commander of the Army of God. [...] A favorite angelic subject in art, matched only by Saint Gabriel, Saint Michael is often depicted as winged and with unsheathed sword.

Here he is at the entrance to Leipzig’s Monument to the Battle of the Nations. Gerry took this photo in November 2009. (Hubbard had a special place in his scripture for Leipzig.)

Here's another image of the Archangel Michael.


In The Book of Babalon, Jack Parsons wrote:Jan 15. Invoked twice. At this time the Scribe [Hubbard] developed some sort of astral vision, describing in detail an old enemy of mine of whom he had never heard, and later the guardian forms of Isis and the Archangel Michael.

Archangel Michael images are usually effeminate, so I didn't make the connection right away. Here are many famous pretty-boy paintings of Michael, who simpers and pouts and shows off his washboard abs as he skewers the devil (i.e. skeptics like me). http://www.catholictradition.org/Angels ... ichael.htm

You never see Archangel Michael with a pretty girl angel, because he's got to be the pretty one. He only hangs around boy angels. Not that there's anything wrong with that.

If the girl angel represents Sea Org, isn't it likely she is threatened and abused by the Guardian Office archangel, rather than protected? How does it work when staff transfer from Guardian Office to regular Sea Org? Do they feel they are changing gender? Did the two angels get to have victory sex after the archangel got the FBI to investigate Paulette Cooper? Can the girl angel ever make it to archangel, or is there a glass ceiling?

So, even if the intention was to draw Archangel Michael, they're making a mess of the logic.

I have rewritten my above posts to mention Michael.
Top 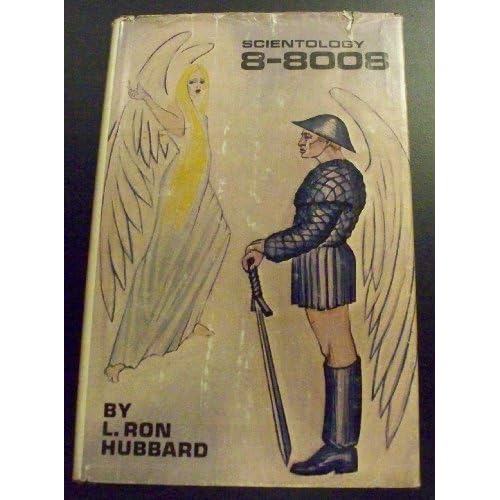 The American forces used it in World War I

but came up with a better design by the time they got involved in World War II.

The German forces in both wars had a much better designed helmet but it became associated with the enemy and much more so in World War II. The helmet currently used by the American forces and the forces of many other countries uses a very similar design to the German helmets of WW I and WW II. When that design was introduced it was nicknamed "The Fritz." I don't know if that name is still used.

Sorry for the history lesson. I think I got carried away.

I think the point I'm trying to make is that with L. Ron Hubbard's soldier angel design nothing fits or works. We should use it as a symbol for scientology in general as scientology (David Miscavige) appears to have eschewed the design.
“Think wrongly if you please, but in all cases think for yourself.”
Doris Lessing

Cool. I didn't think there was so much crappy stuff behind the crappy design for this crappy letterhead. Thanks guise.
WWW.XENU-DIRECTORY.NET Awesome document/media resources
Other Activism: Divided By Zero forum, Why We Protest forum

I'll mention also that the Archangel Michael figures prominently in the Enochian magic of John Dee and Edward Kelly. Hubbard and Parsons performed Enochian magic in the Babalon Working.

The Center for Enochian Studies shows Michael as one of four major Archangels in their system.

CoS has lured a few gay Catholics in; some Archangel Michael imagery would make them feel at home.
Top

Don Carlo wrote:Guessing someone had already written how "Archangel Michael is gay," I googled and found The Archangel Michael as Gay Icon at http://thewildreed.blogspot.com/2007/09 ... -icon.html

CoS has lured a few gay Catholics in; some Archangel Michael imagery would make them feel at home.

Scientology claims that 26% of their membership comes from a Catholic background, and 27.3% comes from a Protestant background. http://www.whatisscientology.org/html/P ... 567-a.html

I don't know whether the Archangel Michael in Enochian Magic is necessarily gay. Parsons and Hubbard performed rituals of a sexual nature in the Babalon Working. Parsons was apparently "at the very least" bisexual. (Ref. e.g., The Babalon Bunch)
INTELLIGENCE SPECIALIST TRAINING ROUTINE – TR L
Purpose: To train the student to give a false statement with good TR-1. To train the student to outflow false data effectively.
Commands: Part l “Tell me a lie”.
Top

It seems this brief impersonal brusqueness is characteristic of letters from people involved in scientology. To analyze this in scientology terminology there is hardly any affinity in that letter.

You get this kind of letter from staff members writing to central files prospects where the staff member is getting a statistic up and doesn't know anything at all about the person to whom they are writing.

This letter is from the person who was at the number two level (oh the puns!) in scientology with only Ron Hubbard senior to her in the organization. She says, "love" but other than that there's no love in that letter.

I hope she enjoyed her basics. (That was covert hostility, by the way, in case you weren't paying attention.)

Reference Initials
If someone other than yourself typed the letter you will include your initials in capital letters followed by the typist's initials in lower case in the following format; AG/gs or AG:gs.

Are we to assume therefore that Jane Kember typed her own letters?

Or did L. Ron have policy on formatting letters that eschewed the standard business model?
“Think wrongly if you please, but in all cases think for yourself.”
Doris Lessing

14 posts [phpBB Debug] PHP Warning: in file [ROOT]/vendor/twig/twig/lib/Twig/Extension/Core.php on line 1266: count(): Parameter must be an array or an object that implements Countable
• Page 1 of 1

Users browsing this forum: No registered users and 4 guests