From the Sun Online

Cruise 'is Christ' of Scientology

TOM Cruise is the new “Christ” of Scientology, according to leaders of the cult-like religion.

The Mission: Impossible star has been told he has been “chosen” to spread the word of his faith throughout the world.

And leader David Miscavige believes that in future, Cruise, 44, will be worshipped like Jesus for his work to raise awareness of the religion.

A source close to the actor, who has risen to one of the church’s top levels, said: “Tom has been told he is Scientology’s Christ-like figure.

“Like Christ, he’s been criticised for his views. But future generations will realise he was right.”

Folks, Scientology has factually lost it. Specifically, David Miscavige has lost his sanity. DM has declared Tom Cruise to be the Christ of Scientology. Tom Cruise has evidently accepted this role and believes himself to be the new world Messiah.

The next great tsunami of public outrage and ridicule is about to engulf Scientology due to its declaration that Cruise is the new Jesus Christ.

The Cult of Scientology is insane and self-destructive. The Cult simply cannot resist saying and doing things that will bring about its own demise: Psychiatry is an evil alien implanting technique, and, Tom Cruise is Jesus Christ.

If David Miscavige is attracted to Tom Cruise, he should just handle it as an OT and not mock up Tom Cruise as Jesus Christ. Maybe the real reason that John Travolta wants to leave Scientology is that he wants no part of Tom Cruise being cast in the role of the new Christ?

It looks like the EP of New OT IX will be the realization that Tom Cruise is Jesus Christ. 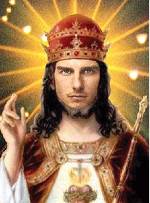 Escaped
[phpBB Debug] PHP Warning: in file [ROOT]/vendor/twig/twig/lib/Twig/Extension/Core.php on line 1266: count(): Parameter must be an array or an object that implements Countable

All that's remaining is the crucifixion and he'll be a genuine martyr as well!! Let's collect thirty pieces of silver to get J.T. to give him the kiss of death (only he'll probably kiss him on the mouth, use tongue, and pinch his ass ).

Since Scientology, in the popular imagination, is such a loaded word -- often associated with heavy-handed recruitment tactics, strong-arm-lawyer assaults and steep membership and course fees -- one would think that Cruise wouldn't be so willing to take a journalist through that world.

"Who are those people that say those things?" Cruise asks when I bring it up over lunch one day. "Because I promise you, it isn't everybody. But I look at those people and I say, 'Bring it. I'm a Scientologist, man. What do you want to know?' I don't mind answering questions."

"He lists some of Scientology's selling points: its drug-abuse, prison-rehabilitation and education programs. Some people, well, if they don't like Scientology, well, then, fuck you." He rises from the table. "Really." He points an angry finger at the imaginary enemy. "Fuck you." His face reddens. "Period."

Scientology just LOVES this kind of publicity. It just so bizarre and far off the mark, that it makes the real religion and beliefs seem acceptable.
There's an old saying: when the going gets tough - pit bulls call a Scientologist."
-David Miscavige- 8 October, 1993
http://www.earthstation1.com/ThemeSongs/Branded.wav
Top

This is from dlisted.

"If Tom Cruise is Jesus Christ does that make Katie Holmes Mary Magdelene?....Well, she is a whore."

If cruise believes that he is gone forever. He'll be remembered alright, as the biggest nut of all time!

Whitedove
Posts: 946
Joined: Wed May 03, 2006 8:39 pm
[phpBB Debug] PHP Warning: in file [ROOT]/vendor/twig/twig/lib/Twig/Extension/Core.php on line 1266: count(): Parameter must be an array or an object that implements Countable

Where this journalist got her source from? Is it from an event? I am curious as if he did say that than THAT is the last straw of their downfall. I still cant believe this

Insanity in all its splendor!

Whitedove
Posts: 946
Joined: Wed May 03, 2006 8:39 pm
[phpBB Debug] PHP Warning: in file [ROOT]/vendor/twig/twig/lib/Twig/Extension/Core.php on line 1266: count(): Parameter must be an array or an object that implements Countable

If you type 'Tom Cruise' in google this information has been spreading like wild fire! Wonder if TC will do an interview to deny this rumour.

Yeah like bad press is better than no press you think? Let see what this will do to $cientology image shall we?

This is making me feel like throwing up! This insanity is scary!
If TC is Christ, that makes DM what than? God?!
yup

[quote="Whitedove"
If TC is Christ, that makes DM what than? God?![/quote]

Whitedove,
I think that would make Hubbard God .
DM would be the Holy Ghost, since no one ever sees him anyway.
Top

His first miracle is to turn Prozac into Niacin.
"What a lot of people don't realize is that Scientology is black magic that is just spread out over a long time period."

Kilia
[phpBB Debug] PHP Warning: in file [ROOT]/vendor/twig/twig/lib/Twig/Extension/Core.php on line 1266: count(): Parameter must be an array or an object that implements Countable

Morsicle wrote:His first miracle is to turn Prozac into Niacin.

congress should pass a law making illegal for DM and TC to miss their doses of prozac.

brownjedi
Posts: 4968
Joined: Thu May 04, 2006 11:19 pm
Location: Phoenix, AZ
[phpBB Debug] PHP Warning: in file [ROOT]/vendor/twig/twig/lib/Twig/Extension/Core.php on line 1266: count(): Parameter must be an array or an object that implements Countable

I imagine that if tc could perform miracles or use those OT powers, he would turn katie into a dude and work on everything else later.

How will they spin this one?
Top

Yes, *who* was the source for this piece of *news*? Don't reputable jouranlists require at least two sources for an article?

This smacks of the same kind of spin CO$ tried to put on a statement made by Cynthia Kisser, EXecutive Director of (old) CAN NATIONAL. CO$ spun something Cynthia said (I can't remember exactly what) into her saying that Christianty was a cult.

If whoever reported this can't substantiate it with some proof other than hearsay....I think they should prepare to be sued by the "church".

"If you have never experienced the danger of battle, the loneliness of imprisonment, the agony of torture, or the pangs of starvation, you are ahead of 500 million people in the world."
Top
Post Reply [phpBB Debug] PHP Warning: in file [ROOT]/vendor/twig/twig/lib/Twig/Extension/Core.php on line 1266: count(): Parameter must be an array or an object that implements Countable